Our last tourist stop on our New Zealand drive is Rotorua.  One could almost believe it’s the last stop in any tourist area in NZ as the visitors are disappearing and the country is going into severe lock down mode.

When we arrived it was raining.  Consequently we planned an indoor visit at the Museum of Art and History, but sorry, it was closed.  What to do next? John suggested ‘let’s just do it’ and visit Whakarewarewa Thermal Village! Even if it’s raining.

We arrived in time for a cultural performance followed by a guided walk around the village including the hot pools, geysers and mud baths. 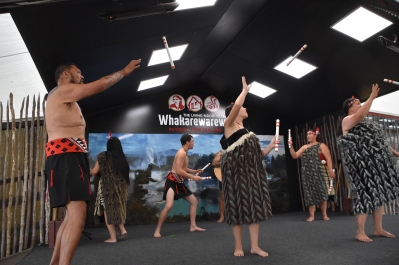 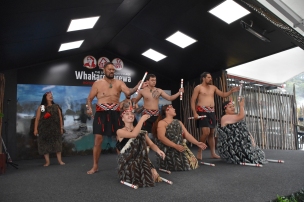 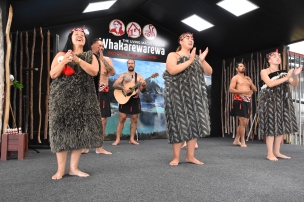 While our walk was conducted in rain, it was helpful to have explained to us the purposes of the Meeting House (weddings, funerals, actual meetings), the cooking pools (good for steaming vegetables or making steamed pudding), the baths (for all members of the family and great for catching up on gossip) 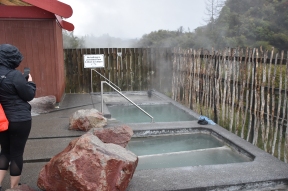 and finishing with waiting for Pohutu and two other geysers to perform. They did, but with the rain causing so much water vapour it was a bit hard to see them. 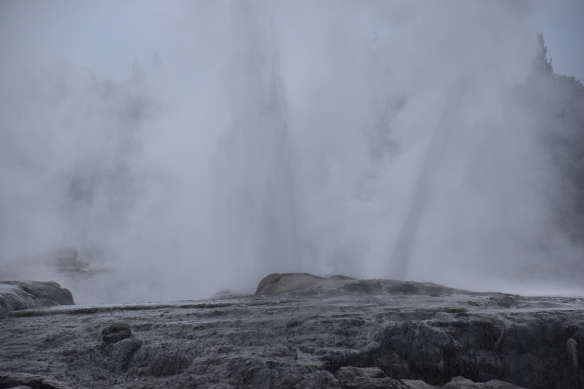 We stopped in a shop in the village for Ros to buy a few presents just as the owner was closing up, closing up she said for probably a couple of months.  An emergency meeting was taking place that afternoon and the next day the whole village was closed.  The shop owner was quite distraught as you can imagine and took great relief in loading Ros up with extra products for no cost. She was very generous even though I guess she was not going to sell them in the near future.

Onwards to our digs for the night, about 15 minutes north and in the countryside (the town has its fair share of less attractive hotels so this was a great find) where we were enthusiastically welcomed by the manager – I think we made her day by turning up as, other than one other couple, we were the entire guest list.  Also as she was from Beijing the map on the side of the car from our Silk Road trip was of interest. One small problem, no dinner provided, so back into Rotorua for dinner, which we might add was excellent.

John was getting anxious about returning to OZ so he called Qantas – a mere 1 hour 40 minute wait to get through, but we were both glad to be told that, ‘yes our flight was definitely going, indeed it is quite a full plane’. I guess the last of the Australians flying home before flights stop altogether.  It is one of the last Qantas planes to fly: feels a bit like getting onto a helicopter in Saigon in the 1970s!

Next day was a bit of a nothing day. Rotorua is shutting down. We headed into Rotorua in case there was something else to see, but too late as every attraction had closed.

We visited a couple of chemists to try to buy face masks for the drive home from the airport, as instructed by the government, but no luck. They are all sold  out. Not sure where they have all gone to as we did not see anyone wearing one. Chemists are open but with lots of cautionary notices and customers kept at a distance. We noticed that had medical clinics the receptionist was in the carpark and patients were told to remain in their car until called one at a time into the surgery.  Unprecedented times. 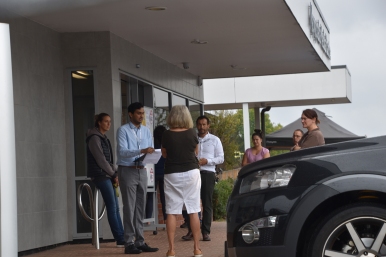 We did go to one supermarket to buy some toilet paper (just in case!) to find sanity prevails in NZ with people pretty much shopping normally. Plenty of toilet paper to choose from. There have been sensible limits on items to stop panic buying and stockpiling such as has been going on in Oz, but apart from this it was life as per the usual in the supermarket itself.

We did wander around the Government gardens and found an open café for coffee overlooking the lake. Here we had to sign in: name phone and email so, we assume, if there is an outbreak traced to the café we can be contacted.  Mind you, it was quite hard to find a café open.

As well, we drove around the lake shore and the city. Then it was back to our accommodation and with a free afternoon we did lots of blogging and to empty the car and pack the bags.  On these trips we can secret around 2 cases of items in corners of the car, under the seat, across the back so it’s quite a big exercise to empty the car to avoid too much attention by Australian customs and quarantine when it returns.  And we packed the essentials for Australia.